In the 18th Century, the extraordinary fame of the wines from Malaga crossed borders as they were the favourite wines of the sweet-toothed Tsarina.  The first winery to bottle this type of wine was created over 150 years ago by the López brothers, dubbed "the Lions" for their courage and work ethos. Sadly history did not bring them together.

They say that Catherine the Great loved the sweet wines of Malaga, enjoying them with cakes known as “Russian cakes”, which she also had brought to St. Petersburg from Spain.  She would never meet the López brothers, the Lions (it could have been the start of a great friendship), as she had died long before their time. She would also have hit it off with the Taifa of Malaga’s Berber King, the good King Idris II, but she was born 750 years too late.

This triangle of characters, separated by history, share a common denominator: Malaga wine. This wine was famous around the world from the ancient times of Moorish Malaga to the late 19th century, when the dreaded phylloxera made its appearance, entering Spain by boat, coincidentally, via the port of Malaga.

Our Berber king, Idris II, had had the good sense not to ban wine from his Malaga taifa (muslim-ruled independent principality), and in fact drank copious amounts of it, calling it charab almalaquí, meaning syrup from Málaga, thereby positioning it as a harmless beverage and freeing it from the repressive restraints of the Koran.

Botella del Málaga VirgenThe beautiful, plump Muscat of Alexandria grapes have grown in the mountains of Malaga since time immemorial.  Also referred to as Roman Muscat, the vineyards always look out towards the sea and grow alongside olive trees.  The ancients considered this grape to be better quality and therefore referred to it as Alexandrian or Roman, to distinguish it from the other Muscat, with a smaller berry, which they referred to as Moorish.  This Moorish grape is also excellent, but they obviously thought that size mattered.  It is these two grape varieties which together go into the most well known wine produced by the traditional bodega founded by the López brothers, nicknamed “the Lions”. Let’s take a look at the story of this famous, highly-reputed bodega…

In the late 19th century, in 1885 to be precise, Salvador López López found himself in Totalán, a small town in the mountains near the provincial capital of Malaga. This enterprising and audacious wine grower was undeterred by the dreaded phylloxera which was already beginning to wreak havoc on his land.  As I mentioned, eight years earlier, this nasty insect had arrived via the port of Malaga.  It came in a shipment of vines from Georgia, USA. which were intended to be potential saviours but turned out to be the exact opposite - a terrible plague which devastated all the vineyards in Europe. These American vines were being brought in to replace native varieties, very weak against the oidium (powdery mildew) fungus, in order to combat the oidium plague, which had been decimating the vineyards for years. The American vines were very resistant to oidium. But what no one could have imagined was that travelling on the ship with them was the dreaded phylloxera louse.

Salvador López was already producing wine in his own wine presses but decided to set up a better quality, higher production winery to continue to supply the markets for the reputed Malaga wines.  He built a facility in Malaga, in an area known as La Cruz del Molinillo.

A few years later his brother, Francisco López López, an important  man as he had become the local mayor, joined him as a partner and the company became López Hermanos. The people of Malaga, ever quick to confer nicknames, affectionately dubbed them "los leones"  (the lions), due to their perseverance, courage and tenacity.   (Their three heirs, who were still considered lions, and their descendants, judiciously decided to baptise one of their wines "Moscatel Tres Leones").

The two López brothers gradually expanded their facilities adding sections for ageing and bottling, and sold wines bearing brand names such as Málaga Virgen, Moscatel Don Salvador and Trajinero., in Spain and the export markets.

Over the years, their descendants continued the work of managing the wineries.  There were three of them: José López García, Salvador López Palacios, and a son-in-law, Rafael de Burgos Carrillo.  Through sheer hard work, the three young lions managed to steer the company through the tough 1930's when to survive alone was a triumph, as the Spanish civil war had left the company completely undercapitalized and large quantities of wine had been seized. The Spanish and European markets were completely devastated at the time, but the Lions kept fighting, maintaining the bodega's soleras through supreme effort.  After the conflict, in the 1940's, they relaunched the family company making it even more successful than it had been previously. They were real pioneers in terms of wine marketing, inventing slogans and concepts which were very progressive for the time.

One of their greatest successes was certainly inspired by Idris II, king of Malaga at the time of the Taifa kingdoms, and his clever idea of calling the wine "syrup" to take it out of its alcoholic niche. They caught market attention by basing their communication on Malaga wines' nutritional and restorative virtues and by flavouring one of these sweet wines with extracts of quinine. 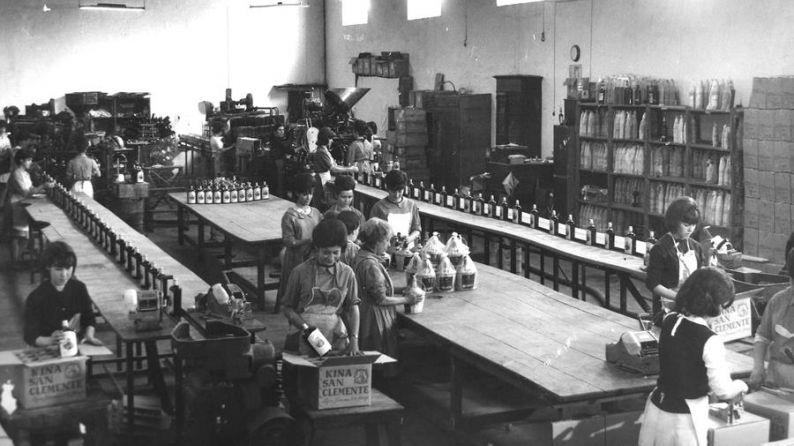 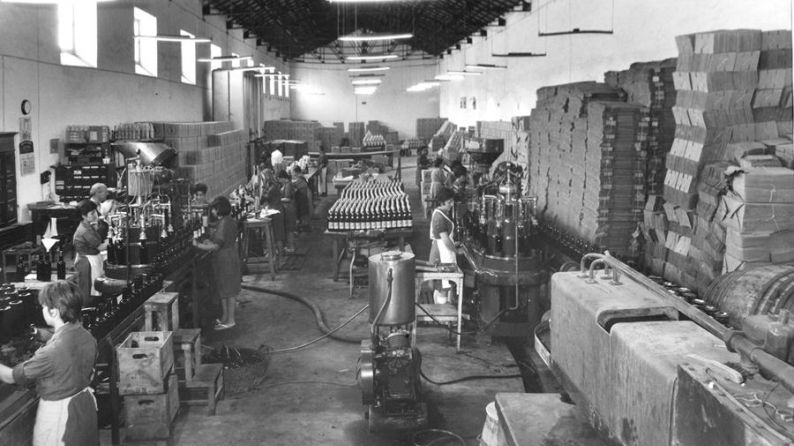 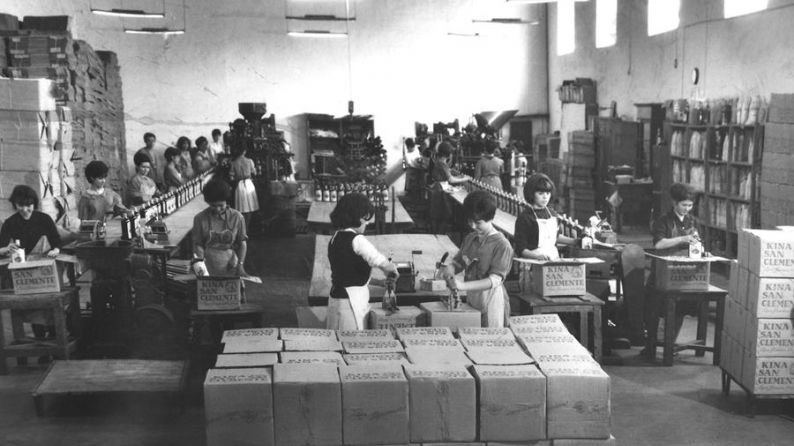 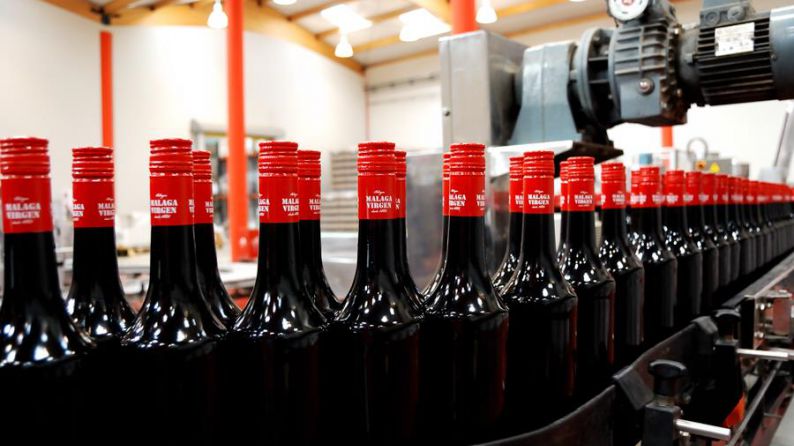 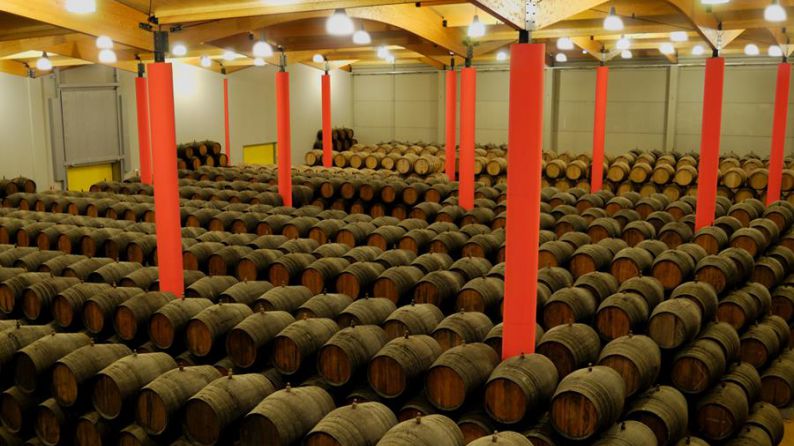 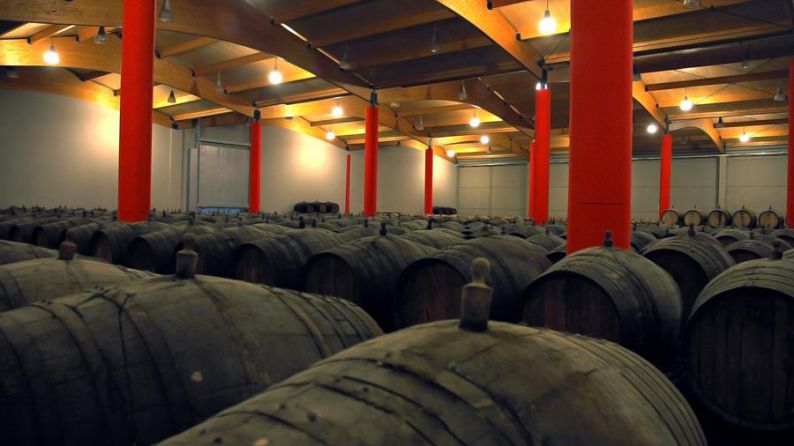 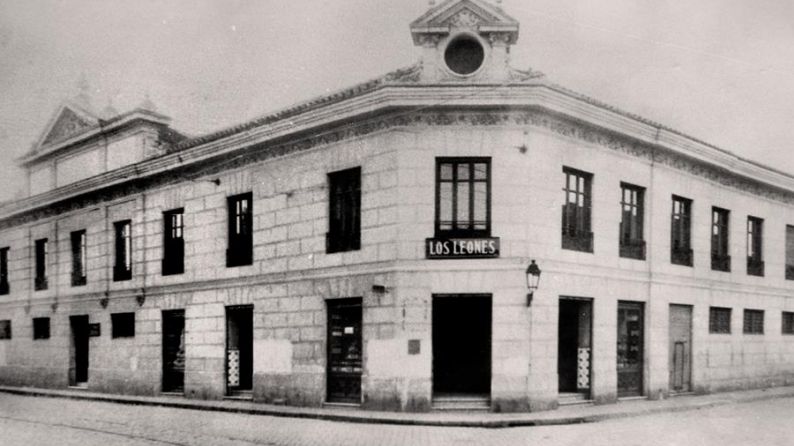 Hermanos López Winery, who had the nickname "Los Leones"

Kina San Clemente 2011The fame of Kina San Clemente, their wine with quinine extracts, was also in large part due to the smart move of associating it with a likeable character, the Kinito figure, which became a symbol of an era, and the foundation on which the spectacular growth of the business was built.

Restless and intelligent, the Lions tirelessly explored new business opportunities, creating great advertising campaigns that led to one of the biggest marketing "booms" of the 1960's.  The idea of calling one of their best-selling wines Malaga ‘Virgen’, long before the word virgin was associated with pure wool, was another of their great successes, making their products true market leaders.

Some years later, in the 1970's, they moved the winery to the outskirts of Malaga, on the El Viso estate, where it had larger premises and better logistics, building a large modern winery equipped with top notch equipment and facilities.  Ten years later, two of the López brothers' grandchildren, Juan Ignacio and Rafael de Burgos, acquired 80% of the shares in the company and brought new products to market: Moscatel Iberia, Cartojal and Brandy 1885.  Using Juan Ignacio de Burgos' extensive experience in the wine industry, they continued to bring out new, innovative products, one of them a white wine with the Sierras de Malaga D.O.   The family has a large estate in an area to the north of the province, near the Fuente de Piedra Lagoon, where they have created a real “university” of Muscat and Pedro Ximenez, the two staple grape varieties in their products.

In 2005, Juan Ignacio and Juan Ignacio's daughter, Piluca, bought all of Rafael's shares and Rafael passed away shortly afterwards, leaving father and daughter as sole shareholders. In the same year they brought out a Syrah single red varietal, Pernales, also a Sierras de Malaga D.O.

They decided to change the company name, known as López Hermanos until that time, to Malaga Virgen, due to this brand's international reputation.  They also  moved the location of the headquarters to the Vista Hermosa estate and bodega in Fuente de Piedra, north of Malaga, on land close to the province of Córdoba.   This is an area of great natural beauty where pink flamingos can be seen from the vineyards due to their proximity to the lagoon of the same name, Fuente de Piedra, recognized as an important bird sanctuary. Production of the company's various products is centralized in this new location. Their range continues to grow with the launch of a rosé wine and a vinegar reserva of extraordinary quality but it still includes all the brands which have made the company’s  name.

Sadly, Juan Ignacio de Burgos died prematurely in January 2008, and his daughter Piluca became the sole owner. She is the fourth generation of the lions of Malaga, and is married to Didier Bricout, who had already been working with the business for 15 years.  Didier gave up his job as a director at a multinational advertising company and joined the business which continues down its path of growth.

And long may it continue…. 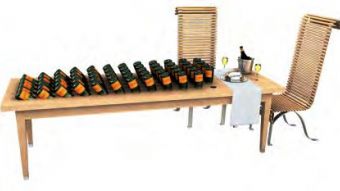